In 2018, National Geographic asked, “Are We Loving French Bulldogs to Death?”

The love for the breed is clear.

From 2013-17, The American Kennel Club saw a huge increase in French Bulldog registrations. In 2013, the breed was the eleventh most popular. By 2017, it was fourth.

You’d think this was a good thing, right? Hardly!

Irresponsible breeders who manipulate genetics are turning the French Bulldog into a breed filled with horrendous health problems. It’s leaving owners devastated, and for some, even bankrupt.

She always wanted a “Frenchie,” as the breed is affectionately known. In 2014, she made the commitment.

“I found a local breeder in my area that just had a litter of French Bulldogs,” Spica recollected. “Two months later I picked up my baby girl, ‘Bleu.’ Within 72 hours, I was at the vet.

“Something was wrong. Bleu was riddled with worms and infections,” Spica said. “She had to be hospitalized for three days. I immediately called the breeder and she said it was normal for a puppy to have these challenges.

“I was nervous, but it was my first time owning a Frenchie, and I took the breeder’s word. Plus, I had already fallen in love.”

After the rough patch in the beginning, Bleu went on to be a normal puppy. She was full of vigor. Her usual day involved lots of puppy play and cuddles with her momma.

Then January 2017 rolled around.

Spica came home after work and found Bleu acting strange. She was having a hard time walking.

“I rushed her back to the vet. They said they were going to keep her for a red blood cell infection. They kept her for observation,” Spica said. “Two days later, I get a call from the vet. They told me I needed to come immediately and take Bleu to a neurologist because her red blood cells were rapidly climbing, and she was paralyzed on her back end.”

Spica immediately left work. She got Bleu and rushed to a leading veterinary neurologist's office, which unfortunately was an hour-and-a-half away.

But it was worth the drive.

It turns out, the original clinic couldn’t see that Bleu had blood clots on her spine because they didn’t have an MRI machine. The neurologist pinpointed the cause and offered a potential solution.

“They said they could do surgery on Bleu to remove the blood clots, but there would be a grave chance of her ever returning back to normal again,” Spica shared sadly. “But I wasn’t giving up. Bleu was my baby girl. I don’t have any children. Bleu is my baby. My family told me I was being selfish for pursuing the surgery. But I didn’t listen.”

Bleu doesn’t get better, she gets AMAZING

The surgery and recovery were hard. Spica developed stomach ulcers from all the stress. She cried often.

Day by day though, Bleu learned her new normal – and it was nothing short of miraculous.

“Bleu got back to her spunky self,” Spica said proudly. “We learned together how to work through her disability.”

Bleu can’t go to the bathroom like normal dogs. Spica has to squeeze her bladder daily to expel the urine.

Also, Bleu doesn’t know when she’s pooping because she has no feeling back there. So she and Spica have a system that allows Bleu to go outside many times throughout the day to do her business.

“Bleu had some challenges with urinary tract infections in the beginning, but due to a new drug out on the market, she’s doing awesome,” Spica said. “We also had to get Bleu some wheels that attach to her back paws so she can be mobile. Now Bleu cruises with the best of them.” 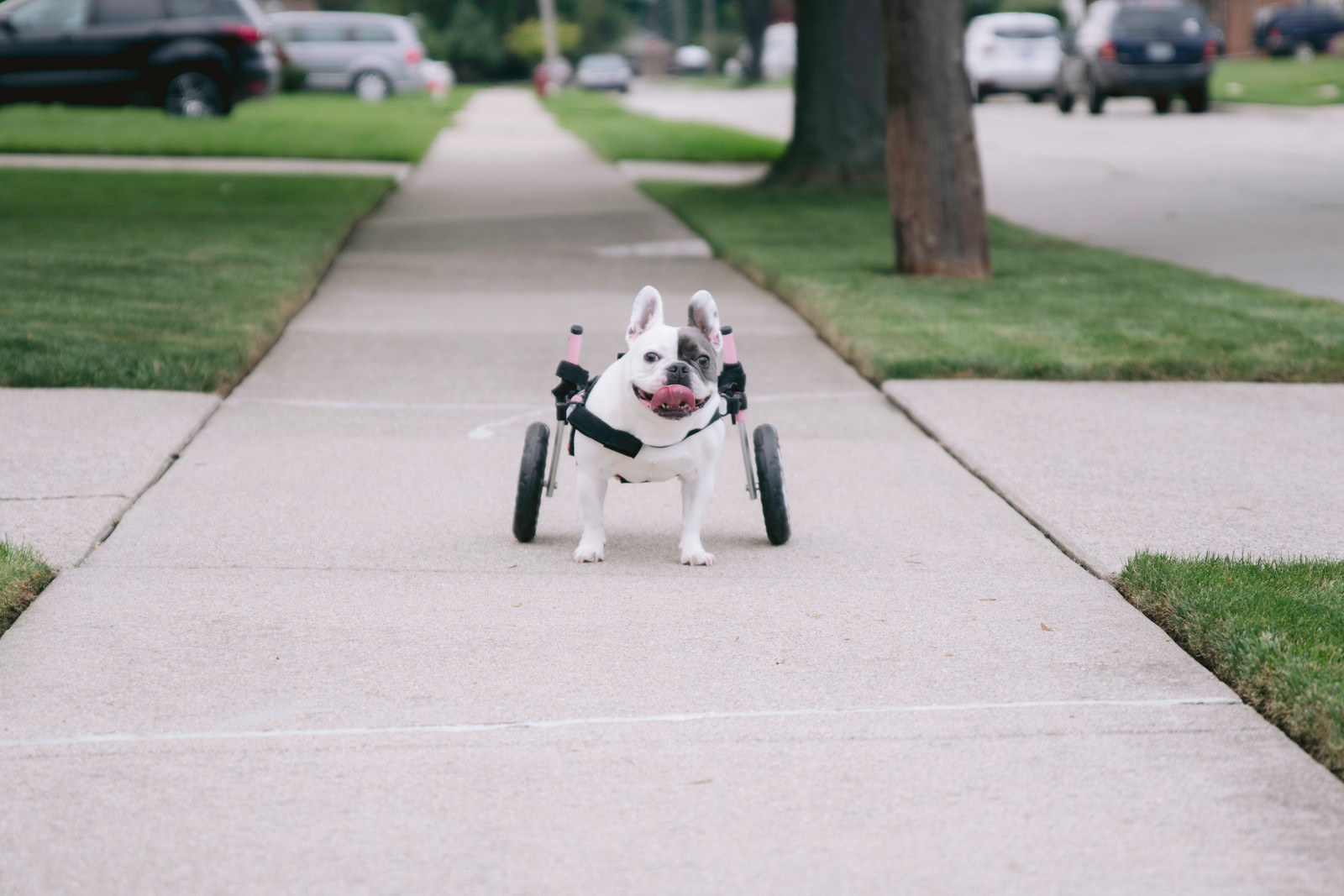 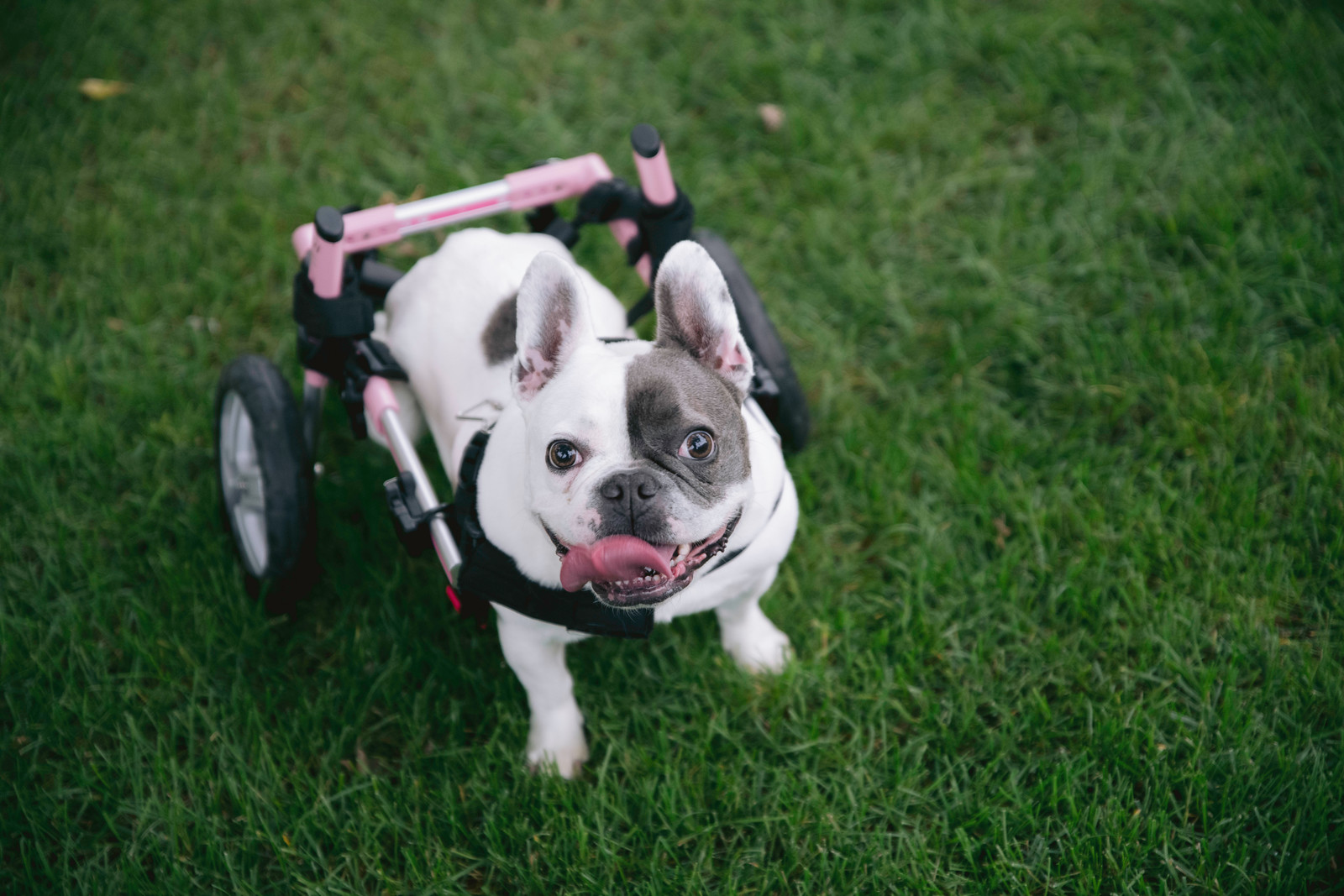 Bleu is LIVING her best life EVER

This past June, Spica married the love her life, Mike. Bleu was the flower girl, complete with a dress to coordinate with the wedding party (Spica got the dress from Fashion Tails Boutique).

And life has been good since then.

When Bleu isn’t popping a wheelie or wearing fancy gowns for her parents’ wedding, she enjoys long boat rides and hanging out at local watering holes.

Her Facebook page keeps her busy too. She loves making people’s days with inspiring posts.

She’s also been meeting and greeting fellow celebrities. Recently, platinum recording artist Uncle Kracker got to meet Bleu at a bar on the water called Bumpers.

What has Bleu’s mom learned through all of this?

Let Bleu be a reminder to us all, nothing can stop us from wheeling forward in life. It’s all about willingness and determination. Wearing a party gown on your birthday helps too!

Melissa and Michael Spica, thank you for existing. Thank you for continuing to share Bleu’s journey on the St. Clair Shores Community Group Page.

“As Long As We Live, It’s You and Me Baby. There Ain’t Nothing Wrong With That.”

GETTING MARRIED FOR THE FIRST TIME AFTER 40

ARE EGGPLANTS AND PEACHES THE NEW LOVE LANGUAGE?